For those of you on whose devices is empty space instead of link to you tube video, click here and you will get there

Chant in praise of Virgin,sung  by  Orthodox monks.
Written by St Nectarios of Egina, an Orthodox saint considered
miracle worker himself here you have translation of words

Talk about divine mothers wouldn't be complete without mentioning Orthodox icons, specially those which were and are believed to be working miracles. So many of  icons represent Virgin Mary, called Theotokos,  with baby Jesus, that this fact amazes how much respect was, and is, given to the idea of motherhood set in most sublime concepts of faith. Theotokos is translated in a simplified way as Mother of God, but exact meaning is "the birth giver to god." 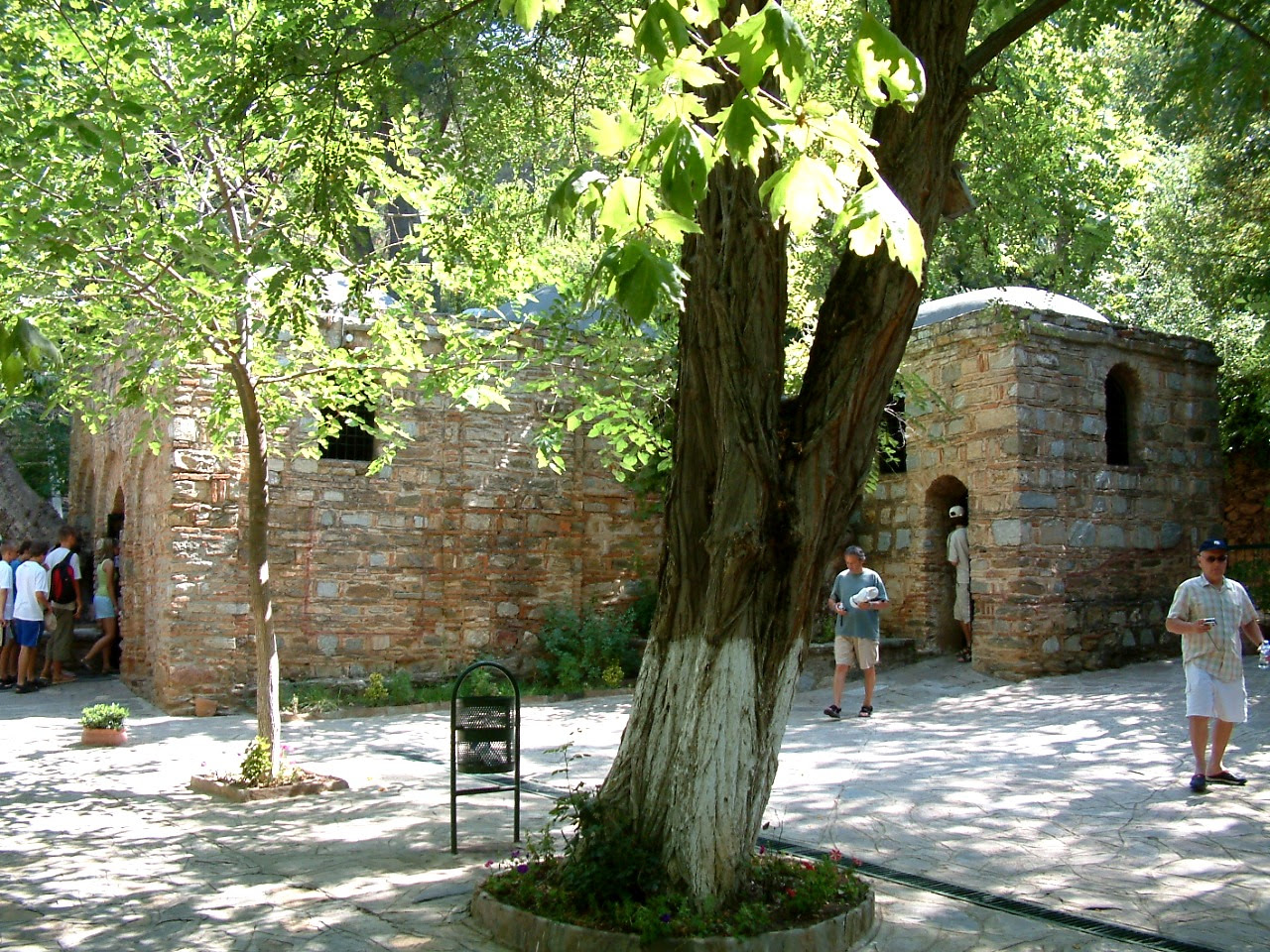 Her cult first developed in Epheus, today Turkey, where according to Eastern tradition she lived with John the Evangelist and Mary Magdalene who retired there after life of preaching, and they were visited by Paul. My apology to those of you who are St Baume Mary Magdalene enthusiasts. St Baume is a wonderful place, but I need to mention Mary Magdalene in Ephesus, as this version  is so ancient, I will do no justice to it by silence. On the left is the picture of house known today as Mary's House, where it is believed that Theotokos lived. According to tradition she was preaching and teaching people about art of healing.There is also a sacred springs which water is supposed to have healing qualities: spring of love, health and happiness. Thanks Radomil for the picture. Ephesus was also the place of the council where the dogma of divine motherhood of Virgin Mary was pronounced. There is also oral tradition in a about Mary's presence there, held by Orthodox Christian village.

As for icons:  those are not considered ordinary images, they are windows to the divine. For Orthodox Christians are presence of the sacred in this world. So, if the icon represents a given saint, this saint presence it there. The icon is treated with respect, can be touched and is kissed in love and honor, and given votive offerings after a performed miracle.

Kissing in Eastern tradition was a very important gesture, honorific kissing included, it meaning was quite broad, which kissing the icons also includes.Western culture is only intimate sign of affection, of friendliness when the French kiss the cheeks to say hello, kisses between parents and children, and of course between lovers.In earlier days there was a lot of kissing, including kissing women on hand as sign of honor.It is still practiced in Poland and Vienna, the yearly opera event.

In Biblical times there were kisses between men, family members who were loved, abut also between friends, or people were kissed out of respect. For ex. kissing someones feet was a sign of very strong reverence an honor.. The same in Jesus times. Christian kiss of peace is one example. Also in Greek there were three words expressing love: eros, filos, agape. Eros is erotic love, filos is friendship as love, agape is often translated as charity, but mean unconditional love, the spiritual kind, love as the essence of the divine, love totally selfless. For example the part in New Testament, where Jesus ask Peter "do you love me more than those,"and here he was referring to his disciples. I was introduced to it by someone who studied Koine Greek,  what is translated in English is love, but in Greek there are two words in questions and answers used: filos and agape. As you probably guess, the Theotokos as a mother is also example of such divine, all surpassing unconditional love.

It is an important distinction between kinds of love, and  it got somehow lost, as the distinction between kisses got lost. In the New Testament at the supper in a house of a Pharisee Jesus defended the woman who washed and anointed and kissed his feet (in Orthodox tradition it wasn't Mary Magdalene) and said: "you gave me no kiss," and praised how she showered his feet with kisses and she will be remembered. This was expression of highest reverence, and the Orthodox Christians remember that. But see by yourself not in my words, why Orthodox Christians kiss icons.

But certain  icons are not to available for kissing. Those are the miracle working icons set higher in the altar.
The icon above is Eluesa type of Madonna, (Our Lady Valdimirskaya, today in Tretakov Gallery). Those graceful depictions are called Virgin of Tender Mercy, of Virgin Showing Mercy, also found in the West. Virgin's and baby Jesus' cheeks touch, or almost touch. Those human gestures of affection are very charming, and here is a small list of miraculous icons in this Eluesa type .

One of miracle icons is the Black Madonna of Czestochowa, this one is not an Eeleusa, but Hedegetria, The Guide as iconograhic type.  Hedegetria, called also Madonna Showing the Way, as gestures with her hand toward  baby Jesus. This is the oldest and the most common stylistic type.

The Black Madonna of Czestochowa is the regal powerful mother, who is believed to heal you when you ask for it. Many of us remember from childhood when something hurt, like for example got a bruise from falling off kick scooter, the mother kissed the bruise and felt so much better. This is not to introduce banality in the reverence of miraculous icons, it is just for reminding that the veneration also includes tender feelings which relate to very basic human experiences. Basic, not base.

She was crowned Queen of Poland. On the walls of the sanctuary there are votive offerings, as thanks from the donors for the miracles of healing: pieces of jewelery, pieces of silver in shapes of parts of human body, also you will see some real life crutches.

The Black Madonna is viewed as powerful protectress. The icon is of Byzantine origin, showing Italianate influences. The legend says it was painted by St Luke himself on the table from the form  Virgin Mary's own household. It is one of several icons allegedly painted by St Luke. The pattern on Virgin's robes is fleur-de-lis.  There is over 130 iconographical types of depicting Virgin Mary on icons, this one is among the regal type images.

Those Theotokos were shown like aristocrats of Byzantine imperial court. But the icon painting, or icon-type of style wasn't limited to the areas we today associate with icons: Italy had those too. Bellow  Hedegetria by Giotto. The stripes of fabric angels wear over their robes belong to a traditional fashion of imperial court in Constantinople. Even the Eleusa type has Byzantine moforion

Eastern Orthodox faith didn't develop Mariology as did the Latin Church, but the devotion to Theotokos was  given, even not much disputed in theological manner. The idea that Virgin Mary was elevated above any created being found its expersion  in showing her with as much dignity as depicting a powerful empress.

Intro to icons
Posted by artelisa at 11:30 AM