Today some people are kind of surprised that so many, specially women, like the idea of Mary Magdalene being the wife of Christ and the mother of his children, and talk about her being erased from history.

I am not surprised. In my earlier entry I wrote about how our ideas of Mary Magdalene represent something what is important in our society. Something what is maybe not so clear in our everyday awareness, but many know in some. Let me use that silly word for it: subconscious level.

First, in spite of the technological advances, the world in not becoming more cozy. Many of humans need things mytho-poetic when technology is invading their lives, even when it is to the advantage.We are humans, not cyborgs whose extensions of mind and body are machines. People turned to things mytho-poetic or considered less rational when huge technological advances were made, during the 19th c. and for example 20th century between wars. This trend now isn't new or surprising. It is a natural reaction when people feel that the pendulum went too far in one direction. So, there is a counter movement. It is evoking creative forces of the mind again.People don't want to be cheated out of this important part of human experience, mytho-poetic creativity is part of whole we call a human mind.

As for Mary Magdalene being a mother and being pushed away: no wonder this idea is popular, lets take a look how we treat motherhood today, what our popular culture reveals, and how motherhood was treated earlier.  This is first entry on the subject of motherhood.First for his entry let consider breast feeding. Talking about things mytho-poetic:  Milky Way according to Greek mythology appeared because of  accidental squirt of Hera's milk while she was nursing Heracles, who as an infant was supposed to acquire god-like qualities by drinking from the breast of the goddess. The word galaxy comes from Greek word for milk.Nice story about milk of the goddess. Today's reality isn't poetic about breast feeding.

This link shows results of study about breast feeding mothers: prejudice. Also those mothers who breast-feed in public have personal stories to tell, how they were treated. Nothing encouraging. There is even a lawyer, a women, who tires to make breast feeding in public illegal. Because it is "disgusting." Not everyone finds it "disgusting," but it is enough for mothers to feel the hostility. Like not everyone is prejudiced against gay people, but enough to create hostile environment. Why so easily labels like "obscene, or"disgusting," "disturbing," are applied to something so positive, psychologically (bonding of mother and child) and what has proven health benefits for the baby?

Nursing Madonnas as images or part of Marian theology is a very interesting phenomenon. The imagery first appeared in Coptic church of Egypt, the iconography was borrowed from the depictions of Isis nursing Horus. Cultures borrow from each other, as languages borrow words.

Role of Virgin as divine mother was very elevated, she was a co-redeemer of humanity. Some old mystical pictures show her standing at the crucifixion, between her and crucified Jesus stands a chalice to which blood from Jesus' side flows and also milk form Virgin's exposed breast. This was analizsed by art history scholar Anna Boczkowska in her  book Triumph of Luna and Venus, about iconography of Paradise part of the Tryptych Garden of Earthly Delights by Heironymus Bosch.

It was elevation of milk to the same importance as blood of Eucharist, it symbolized grace. Of course this was only on symbolic level, as there was no mixing of milk with wine in ritual of Eucharist.

Milk was a symbol of wisdom, and not just an earthly wisdom. It was a supernatural wisdom of knowledge of things divine, and given as a gift of grace.

Milk was also believed to be transformed from blood, and as such to be part of Eucharist and it took its place in mystical writings. Today those writings maybe not easily understandable for our modern mindset, but people centuries ago understood all metaphors very well. Middle Ages were very poetic, made strong use of symbolic and abstract thinking.

The type of iconographical depiction of Madonna as nursing mother was common during the Middle Ages, Renaissance and Baroque. Those images often depict  precious moments of human tenderness, but also they elevated motherhood to divine dimensions also. Probably the prototype of nursing Virgin Mary appeared first among Coptic Christians in Egypt, based on imagery of goddess Isis nursing baby Osiris. This doesn't mean that Iis was worshiped under a new name: it is like a new picture was put in an old frame. 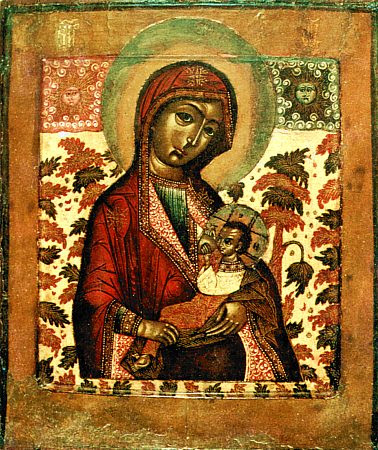 This icon of breast feeding Madonna is considered wonder-working in Easter Orthodox faith. It is Galaktotraufusa (Milk Giver) from Mount  Mount Athos Monastery, in Hilandar Monastery, part of Athos complex. It was put there in 13th century, brought here by  Saint Sava of Serbia and installed in iconostasis in an unusual place which was  reserved for icon of Jesus Christ and the Trinity. I have to admit I don't know what happened to this icon. The other icon brought by St Sava, Madonna of Three Hands is supposed to be there, 2004 was a terrible fire in the monastery.

I am not saying that elevating motherhood to such dimensions was all great and sure recipe for making all women happy: childless women suffered, and women conditions were not good in general. But at least mothers' contributions were not taken for granted, or there was an idea that they shouldn't be taken for granted. Motherhood was part of the totality of human experience, and it is, just not enough credit and respect is given to it now.Gender politics is visible in all art history, struggles related to gender continue today.

Ladies, those of you who are or will be mothers, I say: kudos to you for your patience, gentleness, pain, baby fat, hanging breasts, stretch marks. It is not a little thing to be a mother. Milk, pregnancy and labor pains were once revered in mystical writings about experience of the divine. About this another time.