History of Color # 3 Not Colorful Enough, or?


Dramatic scene. Expressive image, emotions shown in movement, clarity of composition. Fine work, but 600 or 700 years ago it would be considered just not colorful enough. Brown  was perceived as  a very ugly color, just way  too humble. Those contours were the first step in painting, preparatory drawing before filling in color. But we can appreciate it very  much. Similar situation of differences in perception of beauty through ages is the case of the sculptures and architecture of Antiquity, from Greece and Rome.White, unpainted marble  delighted and delights modern sensibilities, but for the Greeks and Romans was just way too plain.
So, lots of paint was put on it, often in garish colors. But the Medieval colors were not really garish, as I mentioned before,  they were jewel-like, as imitating colors of precious stones was so important then.

This is the stone vault of the bell tower of Freiburg Cathedral. This beautiful Gothic construction detail of the tower of the tower is beautiful for us today, but centuries ago  would be just much too grey. When it was newer, it was fresher, much lighter, but still  it was just a technical detail. Even though, it is touching to see the clover leaf adornment chiseled out of stone with such love for detail.

The tower itself is one tenth of the mile high. When I was there, I first visited the framer market at front of the cathedral. After all during the  medieval times markets were common at front of such visited sacred houses. I truly enjoyed this market with buckets of freshly cut flowers, organic food, fragrant hand made soaps, it was very sensual, music, colors, fragrances.  Than I entered the cathedral, looked around, contemplated the art, so typical for a visit on a trip. It was more elevated experience, meditative, sublime.

But this place also offered one  interesting option in addition: to climb the bell tower tower, to be able to see the bells and to admire the view of the old town. Of course I needed to do it. One tenth of the mile high climb: narrow, rather steep stairs, spiraling, twilight.  The climb seemed have no end to me. And than at the top this unusual feeling when you face all those bells which are tons heavy, this stone vault beyond which is the spire of lacy stone carving, becoming less and less material, the essence of Gothic architecture, sublimation of the material world into the heavenly one.  And the view of the blue sky. It was a very strange juxtaposition: stones and the sky.

We, the viewers of today, we like patina. Old artifacts are allowed to have patina, their market value can even diminish if the patina is removed. But for people of Middle Ages, this vault would have been too dirty.
Yes, there is accumulated dirt on the vault, but we don't mind it as much as people would do hundreds of  years ago. They disliked brown, grey, as those colors don't have enough chromatic intensity. Poor peoples' clothes were in neutral colors of raw fabric, made of flax, wool. Wool was often beige, or brown. The richer ones wore colors.

Those stones from the Reichenau Monastery, which was once of the greatest centers of learning, hosting a very large library, and busting with life, are charming to most of us, modern viewers. 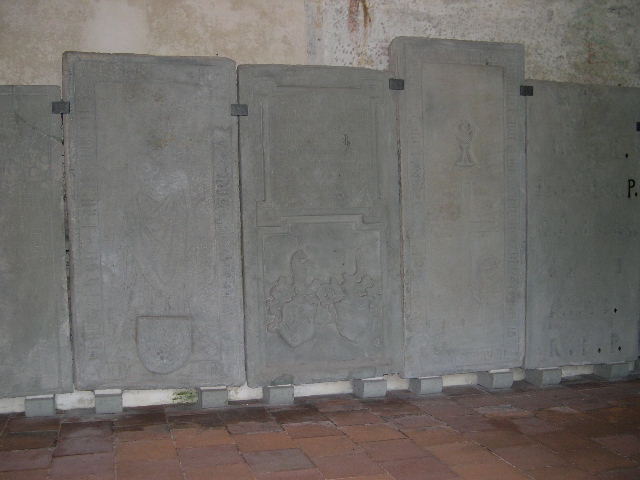 But than, a thousand years ago when scribes of Reichenau produced delicately illustrated books, this combination of brown floor tiles and gray stones would be plain ugly. Medieval mind loved color. Bright, luminous color.  Neutral colors were not of much of use in art.

There were of course exceptions, like frescoes in Umbria, Italy, painted with lots of browns. But this is unusual. Other exception are Cistercian monasteries, with simple, unadorned interiors.Cistercian church is beautiful to us, in its simplicity, and probably was considered as such by the monastic community which valued the life of poverty. But the general idea of the times was that a church is supposed to represent to some degree a paradise on earth, or the heavenly Jerusalem, and needs to be adorned with pure colors.

From my experience when discussing Medieval tastes for things colorful, pure, shiny and glossy, sooner or later comes a comment: "but they were so terribly dirty!" (This comment comes when discussing Rococo also, understandable). However, the idea of Middle Ages as filthy ages is disputed by historians. Some lean toward  idea that indeed, dirt was common, and there is truth in it, but others point otherwise, and there is also truth in it. For example Byzantine Empire had system of waste removal, water flushed toilets, and high level of hygiene. Latin Middle Ages had the system of public baths, which were more like spas: hangouts were it was possible to take a bath, eat while soaking in the communal  bathtub, and  listen to life music, to gossip, and play games. Bathing was a social occasion, and baths were frequented, making the members of the bather gilt rich. Banya in Russia, sauna in Scandinavia, hot springs through Germany and Switzerland, and numerous public baths everywhere point to rather cleaner people than we are willing give them credit for.

For example in Poland bathing was so common that even the beggars were entitled by law to get free bath every two weeks. Or some in Europe monasteries might have as a rule not to bathe, but others required cleanliness rule to follow. Even some of the old monasteries were build close to hot springs, and bathing was a symbolic action of washing away sins, after confession. Above mentioned monastery of Baden Baden was close to hot springs. The Church didn't oppose hygiene, and was advocating cleanliness for health reasons, but was against a habit of too much bathing, as it seemed to be addictive to some: every day several hours in bathing house. I know, i know,  I digress, but so many people have imprinted in their minds that Medieval times were ages of filth and darkness. I felt compelled to give additional information,as we talk about colors, splendor and light in Medieval art..

Yesterday I mentioned  the psychological impact the stained glass windows had on people during the Middle Ages, giving the viewers sense of awe. I have chosen to start with stained glass windows, as a window is very close to light by its function. And when glass is colorful it has strong similarity to a  precious stone. People during the so-called "Dark Ages" were obsessed with light and splendor. They loved bright hues, which reminded them of precious jewels. The comparison of color to precious stones was common among medieval writing which we still can read today.

People also loved gold, not only for its high material value, and being a metal  of bright color, but also for its light reflecting properties. Gold was, logically, the symbol of divinity, of spiritual illumination, and most of all, of divine light. Among the colors of  the rainbow the most  beloved color "trinity" during the Middle Ages was gold, blue and red. Yes, gold instead of yellow. Yellow was used as cheaper alternative to gold, but became also ambiguous, I will elaborate on this subject another time .

Practical reasons also played a role in those choices: for example in a  dimly lit church, when you have bright colors and gold, everything looks more luminous, splendorous. And gold reflects light in the shadow, it gives a beautiful glow, as you see on the picture.


As the medieval minds were so enamored with colors and light, it is understandable that a very complex metaphysics of light was developed by the scholars, theologians, and other  writers. When those people wrote about beauty, they often wrote  using therms describing light. This was not only comparison to the sunlight, but also to a fire. You can imagine the glow of gilded altar like on the photo above was fitting the aesthetic, religious and philosophical expectations of the viewers centuries ago. The Middle Ages used a very extensive vocabulary describing light.

To this  vocabulary of the aesthetics of light belongs the term "illuminated manuscripts,"  which refers to medieval books containing masterful calligraphy, richly painted in many colors and gilded with gold. Those books were adorned by ornate letters, and often had  lush illustrations.  The creation of illuminated manuscripts was a time consuming process, done by monks who were able and willing to spend their lives copping or illustrating books by hand . Take a look at this initial from an  illuminated manuscript.

This Madonna with Child. is  a very typical example of Medieval painting.Golden background was such norm in religious art during the  Middle Ages, as it represented divine light and wisdom. Often the halos of the saints were painted blue, which represented spiritual virtues, contemplation and divinity, and  contrasted nicely with gold. Halos were painted in gold too, and the name "aureole" comes form the name of gold in Latin. Golden aureoles in religious art survived for long time.

Gold and precious stones, or color enamels was used on book covers and  reliquaries. Enamels were also used in jewelery. It was all about color. I have chosen to show you the beautiful chasse from the collection of Metropolitan Museum of Art in New York, and the golden reliquary of the magi shrine from Cologne cathedral. The form of  the chasses was common. Such clear are the colors of the Chasse with Crucifixion and Christ in Majesty . The  Magi Shrine  Reliquary looks very architectural, often reliquaries had this form, imitated architecture: they are like little golden buildings in miniature.

And this beautiful Bust of the Virgin still has lush traces of its original bright paint!

Take a look at this example: it is the portal of the cathedral in Freiburg, Germany. I apologize for the poor quality of this picture: when I took it,  there was a plastic net spanned during renovation work, and this created strange light reflexes. (Talking about light, ha!) But you can surely  guess the richness of colorful paint and gold when the portal was freshly made, and was carefully kept this way. The interiors of the Medieval cathedrals were colorful too. Not garish, but simply intense, jewel-like. If the budgets of the cities allowed for such splurge, the ceilings of the cathedrals were painted in blue and adorned with golden stars. Today this doesn't seem like a real splurge now,  but then blue pigments were expensive.


I hope you like the links, as the pictures are of  high quality, (not like my take of the portal), and have perfect descriptions. If you have chance, you can see those examples in person at the Metropolitan Museum in New York. This museum has great collections. Freiburg is great to visit also, but the Cologne cathedral is very unusual in this regard that is the closest to the ideal of a Gothic cathedral as such. Not only the very slender proportions, but it is a truly a  finished cathedral. Some ideals were designed in theory, but never totally finished in real life. You see sometimes towers which were never finished, have flat tops without spires, like some of the  famous cathedrals in France.

Coming soon: the post about colors disliked by the medieval people, and after that a post about symbolic meaning of colors. Please, stay tuned.