Imagery of Ascention of Mary Magdalene

On this picture, originally from Gdansk today in National Museum in Warsaw National Museum, Warsaw we see ascension of Mary Magdalene. It is one type of many way of representing Mary Magdalene in art, here she is shown as a  saint who meditated so much that she was feed divine food by God himself, according to Medieval accounts. Latin church tradition says  happened seven times daily, angels took her before the throne of god where she was given nourishment.

Very similar in form on canonical depictions of ascension of Virgin Mary. I was writing before that Mary Magdalene was the second most depicted woman in Catholic art, after Mary mother of Jesus. It comes at no surprise that the glorification images, painting or sculptures are often similar. Here we have Mary Magdalene crowned by Gods himself, held in sky by angels.  We know that this is Mary Magdalene because of hairy costume. But Mary Magdalene dressed in more ornate robes is represented also, see my other entries fro examples.

Another depiction of Mary Magdalene's ascension, also form my country, Poland, this time from St John's church in  Torun. I love the charm and joy of this one. And I am so glad that wiki commons has nice pictures, it is often a chore to take a good picture without flash. I never use flash while taking photos of art. As an artist I know that this is bad for the pigments.

This graceful Mary Magdalene is shown as a hermit, but there is nothing austere in the scene. All is charming and lush, full of beatitude. About the austerities reminds her body covered with flowing hair, which is very beautiful, the rocks of the cave and flat belly. Those days a good muffin on the belly was a sign of female beauty, flat belly was indicating that someone hadn't enough to eat. What is beautiful today for us, for people living in times when Gothic art was created such flat belly wasn't beautiful, but it was signifying that the depicted saint wasn't eating much. Some fashion of medieval times is kind of strange for us today, and I think is worth a separate entry.


Here we have a woodcut from Nurnber Chronicle ( via wikicommons, Schedel). Colorful wings of angels, very long robes with lots of draperies which formed angular folds, and round, protruding belly of the female figure was very typical for the art of the days, specially North of Alps.
Here, according to the artist,  we can say the divine nourishment was as filling as earthly food.

Here a few examples of Ascension of Mary Magdalene to browse 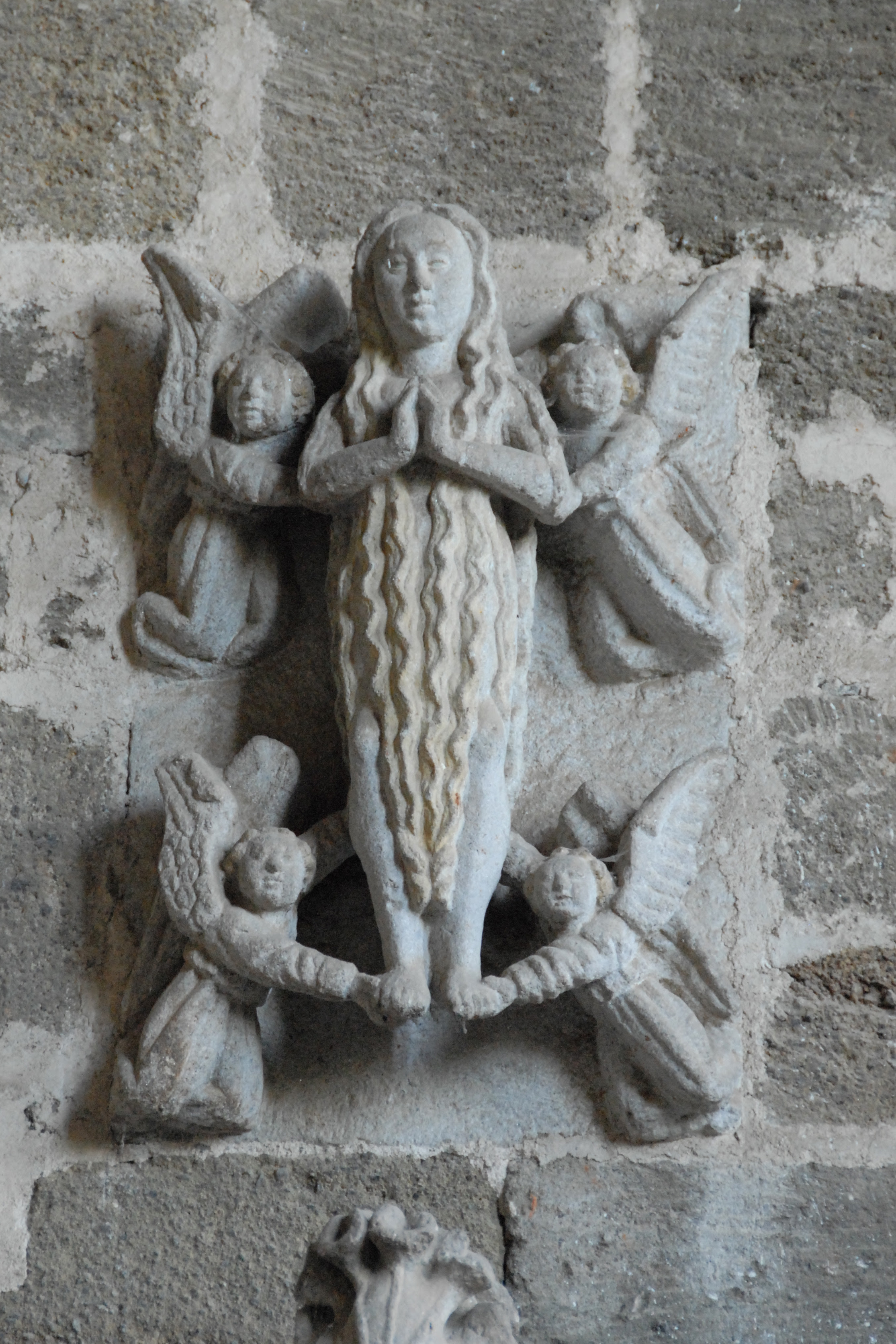 This Mary Magdalene sculpted in stone can be seen in Chanteuges Abbey. Wikipedia articles about this wonderful place are in German and French, so I don't include them here.
But those figures of Mary Magdalene and angles can be found in France, and not only there in various churches or abbeys.
They have their won charm and are of rugged beauty.
Photo by Jochen Jahnke.
Posted by artelisa at 4:00 PM