Mountain of Venus: legend about Tannhauser

Recently I saw with my husband the movie Wagner's Dream. Totally fascinating documentary (and my husband told me it was very interesting to watch me watching the movie, my reactions, etc.) It was about the Ring of Nibelungen cycle, but this brings me to Tannhuaser, the other hero of Wagner's operatic world, and the legend about Mountain of Venus, a real mountain called Venusberg close to Horschelsberg. Located between Gotha and Eisenau in Thuringia, Germany. This area was explored by ethnographers of the XIX c., the Grimm Brothers included.Certain legends are as significant in German cultural heritage as the legends of King Arthur in Britain. This one is about Tannhauser, a knight and  a poet who supposedly took part in the literary competition at the Wartburg Castle, along with few of other historically known knight-poets.The real life Tannhauser (or Tannhauser, as his name was also written), as a poet wrote very erotic and easy-going pieces, not as refined as the courtly love poems by the other knight-troubadours (Minnesangers in German,  literally singers of love).

The Mountain of Venus itself is located somehow close to the  Wartburg castle. Here according to records (which may or may not be true) took place a competition between Minnensangers, who were German troubadours. Among others beside Tannhuaser very famous names come up: Walter von der Vogelweide, also Wolfram von Eschenbach, who is probably most known as the author of the Grail romance; Perzival.
You can see  them and their poetry in the Codex Manese manuscript

Here at  this mountain  with caves,  according to the legend, Tannhauser, their real life peer,  knight and poet,  met the goddess of love, Venus herself. She was surrounded with her court of beautiful women, and invited him to her subterrean world. He followed gladly, as he was a very sensual person, and through they entered  through the cave into the earth. The knight resided there for seven years. Some versions talk about one year. He enjoyed the easy fulfilment of all his carnal desires, and was very happy, unaware of passing time.  But finally he started to  feel empty, longing for earth, in spite of all delights, including pleasures given by Venus herself.

Venus Cave bellow, auhtor: Metilsteiner.
Venus, however, didn't allow him to leave. When he was thinking of Virgin Mary, yearning for freedom, the Virgin appeared in an instant, and all charm of the under-terrestial world disappeared. At once Tannhauser found himself at the feet of the Wartburg Castle.

Yes, the same where Luther was given protection, the house of St. Elizabeth, and the place of competition of Minnensangers, and featured in Wagner's opera Tannhauser. Click on the picture to see high resolution.
Here he felt free , and in a state of rapture collected flowers. It was a kind of religious ecstasy. He decided to confess all his sexual debauchery, and ask Got for forgiveness. However, every priest who heard his confession was too shocked and didn't want to grant him absolution, telling that God will never, ever forgive such sins. Tannhauser even went to Rome in despair, confessed to the pope Urban IV himself, and asked for  forgiveness again. All this made the stern pope very upset: he said that first his pontifical staff  "will rather grow green, and bloom than God will forgive such lust." Depressed Tannhauser departed, decided to go back to the Venusberg, as there was no place for him on earth, he went back to the goddess and her realm of carnal pleasures. But after three days the pastoral staff of the pope greened with lush leaves, and flowered profusely. The pontiff send his  messengers after the desperate knight, but they couldn't find him anymore. The people in the village close to the  Venusberg told them he passed by, with somber face.He was never found again. 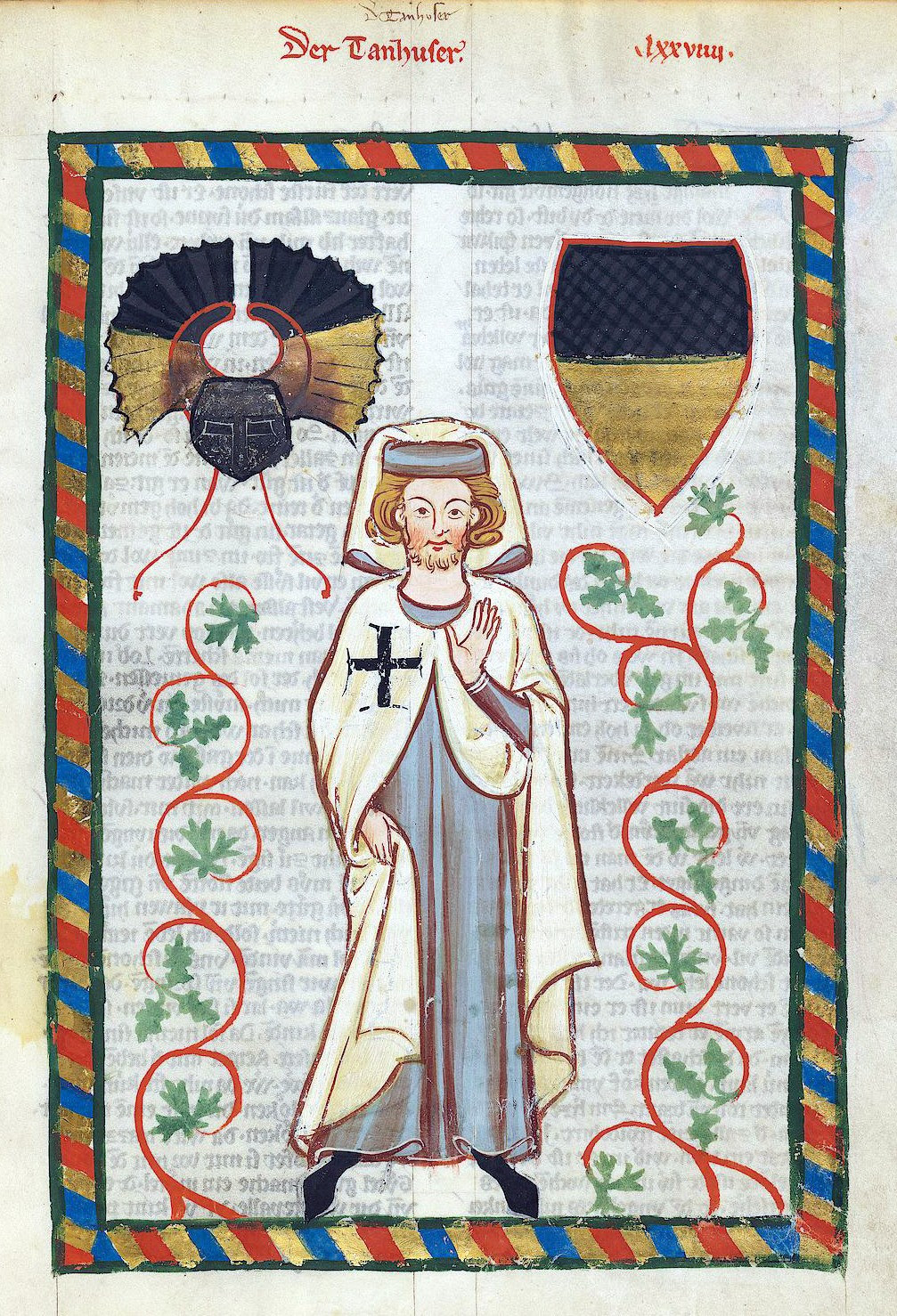 Picture on the left  is Tannhauser himself, from page of Codex Manese where some of his poetry are compiled, among them also a repentance song. The Codex is an anthology of medieval German poetry. The legend of Tannhauser made to German literature during XIX c. when literati  started to be interested in folklore and medieval world. But the strongest increase of popularity came after Richard Wagner's opera, named after the poet and retelling the Venus  legend, and the story about   competition at the Wartburg Castle, combined with Wagner's own creative liberties.

The Venusberg story is very interesting for three reasons: first it talks about real-life poet and maybe a real-life poetic competition, fits the history of a  personality, and his creative output into a legend. Second, it is an old legend Christianized, similar as the grail story was Christianized,it is a hybrid. It shows dynamism of a society which was in transition from culture of paganism to conforming into a new religion, and still quite new fedaul reality. The third reason: it gives a moral lesson about forgiveness, which it is not granted freely, and forces the protagonist to go back to the old ways.It shows that people are not forgiving, but the divine forgives. A lot of moralising here: about the goddess Venus and her court, personality of the  poet knight, but also about the hard hearts of the clergy.No one is spared, and in this story the divine gives a lesson that forgiveness should be granted freely and quickly, and this is a true loving way. The story is of course about carnal and spiritual love, and about serving a lady, but it is so multi layered. This were also times when Europe clarified its own ideas of romantic love.

Regarding an old legend combined with Christianity; Sabine Baring-Gould mentioned this one  in his book Curious Myths of the Middle Ages. He reported that the legend appears in its basic version in many countries in Europe, on which the local folklore built other layers. No confession and clerical invlovement is seen except Taanhauser story.Which I was not aware of. Basic version is that under-terrestrial beings want to contact human beings. A man comes in contact with them, has a very beautiful women as  a lover. He longs for earth, and escapes. However, he needs to return, as the earthly world is not receptive to him anymore. Baring-Gould gave examples of stories which have variations, but retain the basic roots. A very folklorist  view. Sometimes a pagan goddess, sometimes the goddess Venus herself  is present, and there is also a motive of ring and the marriage. There are also more mountains of Venus in Germany, also in Italy, there called Venus mountains, or mountains of Sybil. (I wonder if this has to do with Roman presence there). Baring-Gould also mentions that  the story of Tam Lin, tells stories from Catalonia, Farroe Islands, Sweden, Pomerania, Switzerland, etc. and mentions written versions by various ancient authors.Some are more related, some are more distant relatives.

I also see now the connection between a legend from Poland, about a young knight who went through the waves into the heart of the lake to be married to some beautiful woman who held a court there. He was telling his loyal horse-or loyal friend who was a rider, depends on version- to go to and to tell his family he wedded a beautiful lady of the lake. The mother of the knight in the bottom of the lake knew the  he will never come back. Poland has of course many stories about aquatic world, courts and the cities, as there are so many lakes.

Tannhauser was present among supernatural beings, under the earth. Main ruler of the court here is chtonic type of the goddess, in spite of the goddes being Venus,a conflation. And the idea of under-terresatial folk itself reminds me of a huge bestseller, kind of  the Da Vinci Code of the turn of XIX c. It was a novel about Vril and subterrean super race living in  caves under the earth. The novel was an enormous financial success. Many people actually believed in reality of such race, and this belief was rumored to linger for long. Some of the Nazis supposedly believed it, it was believed in some occult circles, in Theosophy belief in Vril still exists to some extend. It was a novel, but seriously captured people's belief in reality. Vril, similar like the grail, is the idea about power granted, about  fulfillment of wishes. No wonder that both, the grail and the vril resonated so strongly with the audiences.  Recently we had The Secret phenomenon, which falls in the same category:  power of fulfilment of wishes, power of belief. Law of Attraction, another magical world for the frustrated. But I prefer the legends, I confess, Vril and the Secret don't attract me.  Are they an equivalent of today's court of Venus, where first after some time one sees the illusion?

As for the caves in Venusberg: local society hopes they will attract tourism, and the caves were explored. In them are diverse colonies of rare  bats, which hopefully will not suffer in case tourism increases one day. Iron bars at the entrance of some caves make a lot of sense, and here is a responsible way of protecting nature.
Posted by artelisa at 1:30 AM