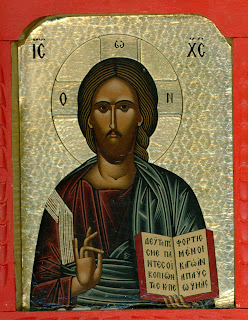 Once strolling through the old streets close to Krakow's Old Town Market Square I heard amazing singing, Orthodox choir. I stood on the street and listen, assuming someone had a nice CD playing, the sound coming from one of the open windows. But listening more carefully I heard that the sound came  the courtyard. Knowing from experience that those centuries-old houses quite often have beautiful an intriguing yards surrounded by walls, I went, slowly. Somehow the music pulled me. Than I saw the sign, "Orthodox Church," and an arrow. I followed, after climbing some steps in one of the old buildings I entered a church which was housed among apartments, not a regular Orthodox church building I normally knew and view from afar, but never visited during liturgy. There I saw the choir: three women with white kerchiefs covering their heads, and with them was one man, all very focused and singing beautifully. The congregation was very small, but there were icons on the walls, with  lamps hanging before them, and the liturgy was celebrated. In my country Orthodox Christians have a reputation of being excellent singers, and here was the proof, there were just so good that I was thinking it was a CD!  After the liturgy people were kissing the icons. All was very touching, I was moved by the music, liturgy, and by the solemn atmosphere. Something like in the videos below, specially the second one, the link.

The icon here is Christ Pantecrator, XXI c. by anonymous maker for tourist industry in Bulgaria, but I love it anyway!

Religions don't bother me, (unless there is some kind of abuse going on), but in general I find a lot of beauty in this kind of human involvement. The word religion comes form the words re-ligare, which means reconnect. I like this interpretation of the word's origins.

I will be writing more about Byzantine traditions, as they are important. They are part of Europe's cultural heritage, and without Byzantium there wouldn't be Italian Renaissance as we know it, nor it would there be European heritage as we know it. There the traditions of  Greece and Rome lived while in Western Europe it was a strong break. Not that ancient  philosophies were not read in the West during the Middle Ages, after all Latin Europe had medieval renaissances, but those parts of Europe were culturally developing in their own direction, and were much poorer.

Byzantine art was a mixture of classical Greek and Roman  traditions influenced by Eastern mysticism and love for imagination. Icons represented Jesus, or Mary, saints and angels, but also in its highly stylized canon there was representation of aesthetics and fashions of the imperial court. So, Jesus and Mary are dressed in robes of imperial purple, or the saints and angels depicted as dressed like important people of the imperial court. Icons didn't change much. Of course there are various schools of icon painting, and there also some influences among those schools which are more Westernized, but in general the icons are preserving the past very well, now and here. The tradition is followed rather strictly, and we can see how people were dressed long time ago, still can today see the stripes of fabric called loros still part of the garments, or see the color which are in the range of hue variations of real purple of Tyre. We can see how some courtiers looked like at the court of Constantinople, which was than the city of amazing luxury.

What fascinates me that when you look at the traditional icons or frescoes in Byzantine style and you see the liturgical garments used today, you recognize that some garment are very similar to what we see on the icons.Byzantine fashion of a millennium ago. I hope you will enjoy the beauty of the chants, and the visual part, and see similarities of the garments worn by the clergy mirroring the garments of the saints on the frescoes. It is like being among the people of Constantinople of old.

And take a loo at the fresco at 8:45, the creature with one face and six red wings with some writing (reads Cherubim) is an archaic depiction of a cherubim, one of the highest angels in angelic hierarchy. Stained glass window at 12: 25 shows also a cherubim or a seraph, those were often interchangeable. This is a sequence of very interesting and beautiful  pictures, not a liturgy video. Enjoy!

And just  in case you want more, here is another video! http://www.youtube.com/watch?v=UsL61X5fOLU The piece sung here is Agni Parthene, a non-liturgical hymnopoem to Virgin Mary. Have blessed time!